Back in school, we had this physics lab experiment that aimed at teaching how to balance weights. The task at hand was apparently simple. We had 4 metal balls which we had to rest on a lever such that the lever didn’t bend on any of the sides. What seemed simple at first turned out to be quite a challenge. A slight movement was enough to disturb the balance and move the weights on one of the sides. I remember how at my first attempt, the weights actually slid down to the right side. 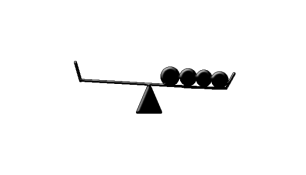 Back to realty. Growing up in India (and many other parts of the world), it’s not shocking to see how women have been labelled and treated as the weaker, less important section of the society. Our age old beliefs, customs and traditions are a testimony of the above fact. In some areas, girls are still not allowed to work, or even go to school. Household chores such as laundry, dusting, cooking etc have been for long thought of as the sole responsibility of the lady of the house. With such and many more pathetic, non nonsensical beliefs, the shockingly high number of crimes against women, cases of eve teasing , sexual harassment and female foeticide are perhaps a direct consequence. For a long time, some men ( who don’t qualify as men, really) have committed heinous acts against women and have put the entire men population at shame.

In recent times, however, the awareness about injustice against women and the fight against the popular version of gender discrimination has picked up pace. The educated youth of today doesn’t support such kind of injustice and discrimination, and is ready to raise its voice against it. An average educated boy doesn’t believe that a girl studying in his college is less deserving. Perhaps this kind of change in trend is what has led to women achieving more than before, as they’re given more chances to showcase their true talent and capabilities. Today, the world knows and accepts what women are capable of, and this is but a tight slap on the face of those who ever believed that women are weak. The social media is a great contributor towards spreading the awareness about the wrongs done to women, and why it has to stop. If today, a girl gets harassed, you’ll perhaps notice more men than women, who feel outraged at such incidents. That’s a place where we should be at.

Talking of that physics experiment again, I remember that it was all but simple. While at the first attempt, the weights quickly slid down to the right side, as I tried to balance them again, they all now shifted towards the left. It wasn’t just me. Almost all of my classmates faced this stubborn problem. When we tried to fix one end, the other end would bend.

Somehow, I feel a striking similarity between this experiment and our concept of gender equality concept. Lately, we’ve been trying to fix one end, but the other end has slowly begun to suffer. It’s funny how in the patriarchal society we’ve been living in, the men have started to feel discriminated against. No reserved seats for men in public transport, restricted entry for men without female company to some clubs/pubs, preference of women candidates in jobs etc are some ways men feel the bias against them. If a man happens to get involved in a tiff with a women in some public place, we all know who is held, or at the least, assumed guilty. There are times when the discrimination is so subtle that it fails to make a lasting impression. There was this news headline on a newspaper some days back that read ’15 dead, including 4 women, in a train accident’. I wonder how 4 women adds to the impact, perhaps their lives matter more. If a man kills another man, well it almost feels like an ‘acceptable’ crime. Why wouldn’t it, it wasn’t a crime against women after all. Lately, there have been a few cases, where some women misused the state of affairs to earn some limelight and false praises. But let’s not even go there, just the way I won’t mention any more of the various other cases where men get discriminated against. I won’t go there because that’s not the motive.

Back to that physics experiment, the good thing about it was that on the third or fourth attempt, almost all the class was able to get the weights balanced correctly. Basically, our society is still stuck in the second phase. For long, it has been weighing the first half more than the other, and now we’re trying to fix that and in the process, we are perhaps bending towards the other side a bit. But that’s alright, and perfectly fine as long as we realize it in time. We have to realize the true meaning of gender equality. Men and women are equal to each other, and should be treated like wise. If women have some weak points, men have their own. None of the two is superior to the other, and none deserves any less respect. To all my fellow men, we need to understand that women are as important as we are. They deserve a lot more than just sticking to kitchens or keeping fasts in hope of your longer life. If today, you sometimes feel that they demand more than they should, and in a way, are being unfair, it’s probably because they have been deprived of a lot for generations. We would have probably done the same, and its totally fine. Women need to realize that just because 10 percent of men commit rapes or sexual crimes, it doesn’t mean all men do. It means that those 10 percent are not men. Women should also realize that if they misuse the growing awareness about anti women crime against men for fame or monetary benefits, this can revert the state and put us back to where we came from.  Ideal would be the world where no women is expected to cook, not any more than a man, and a world where no man is expected to earn more than a woman.  And we’ll reach there. If students in a school can learn to maintain the balance, why can’t we?