The 69th anniversary of our country’s independence is here. The patriotic in me feels proud of what my country has achieved over the past seven decades. From being known as the land of rituals, snake charmers, and superstitions, we’ve really come a long way. Today, the world knows us as engineers, CEOs and scientists. The Mangalyaan makes me proud, and so do men such as Mr. Sundar Pichai, Mr. Satya Nadela or Mr. Kailash Satyarthi. I feel honoured to be a part of such a nation. I feel like waiving my beloved country’s flag.

But as is true for anything else, there’s another side to me. The ‘I hate this country, it can never develop’ side. I find myself complaining about my country’s problems every day. When I start my day and head out for work, I resent the overly crowded streets I cry about the densely polluted air and poor traffic control. When I see beggars and poor children clad in torn clothes, I curse the government for their condition. Of course, it’s the government’s fault. Had the ministers and political leaders been doing their job with sincerity and honesty, problems like poverty, pollution and population would not exist. I go through this round of thoughts every day. However, that’s precisely where I leave my country to its problems. My responsibility ends there. No one blames me. No one asks me to not stop there. No one expects me to be doing anything else about it. No one, except the evil whom I hate the most. My biggest critic, Mr Conscience. 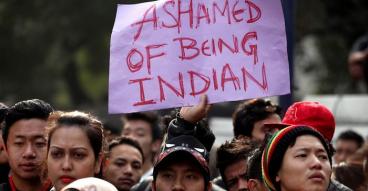 That demon questions my right to be proud of my country’s achievements. What exactly, have I done to take India where it is today, he asks. I want to punch him in the face. He goes on to ask if there’s any tiny contribution that I’ve put in for my country in the twenty five years of my existence. I try hard to recall the last time I did something for my country, so that I can shut his bloody mouth. But I can’t. I begin to feel irritated. It’s only the beginning. Mr. Conscience tells me on my face how I have no right to make any complains about my own country and it’s problems. Since I’m not the part of the solution, I must be a part of the problem, he says. That’s it, he has done it. It’s time I shut his damn face and go to sleep. The best part of sleep is that you get to escape whatever you want. Sometimes, that’s your only way out of dealing with your conscience.  I love sleep.

Honestly, I know I could have contributed a little in all these years. I know I still can. I can perhaps donate a small amount of my monthly salary to a charity. I can resist taking my own car and use the public transport, for the sake of one less car on road. All those times when I wasted food, I could have saved that and gave it to the needy. I can also give up the greed and pay all taxes with sincerity. I can spread awareness among people to keep the country clean, or at least, make sure that I myself don’t litter public places and roads.  I can perhaps plead to my friends on Facebook to do something good, instead of posting that selfie that I was about to post. I can start on this Independence Day, for what else could be a better day. But I’m probably too lazy to turn ‘can’ into ‘will’. It’s a lot easier to feel proud while other’s give us the reasons. So is to complain and forget. I think I’ll stick to the routine. I will probably fly kites in the morning feeling proud, and drink beer with friends at night, cursing my country and its problems.